In my youth I played a lot of table hockey. I was pretty good and was a member of a pool of six players who dominated the National and International competitions in which our group participated.  In fact, our top players (twins whose names also happen to be Ettinger- no relation) were once featured on a segment of that Canadian institution, Hockey Night In Canada. (Our pool took six of the top ten spots – I came in in 8th place).

So, what does this have to do with Art?

Nothing really, until this concept struck me.  At a time where I was perfecting my technique of using masking tape to create straight lines and tightly edged circles, I decided to take on the challenge of exploring the various geometries found on the surface of a hockey rink/table hockey set, simply replacing the nets at either end of the rink with keyboards.

This painting is effective hanging traditionally on a wall but it is especially striking when displayed flat on a table, where it has the effect of a painting and sculpture simultaneously. 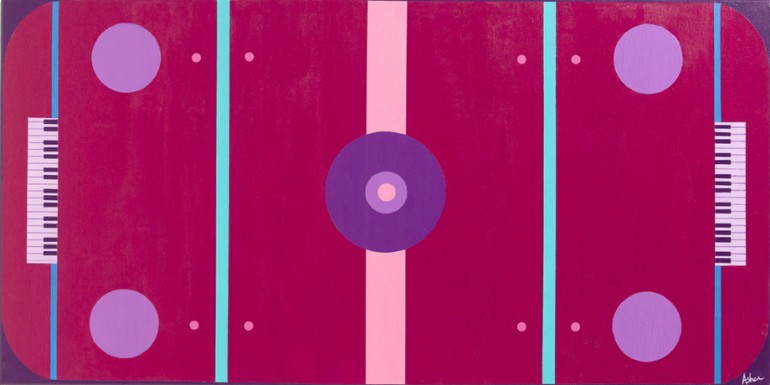