The Tipping Point, an important point of development for me, was inspired partly by Kasimir Malevich’s Suprematist pieces and partly by the fantastic background art seen in the classic Warner Brothers cartoons.

Though I am a trained composed/arranger, someone who has created complex music for large ensembles**, I am, nonetheless, ever fascinated by the ability of simple forms like three chord rock music to hold a listener’s attention for extended periods. That’s why I call the approach seen in this painting ‘Three Chord Art’.

For most of us, our brains can only follow two separate element streams simultaneously; add a third element and an exponential amount of complexity is added to the perceptual experience.

Malevich showed us that even a minimal number of monochromatic elements can hold a viewer’s attention, the complexity being in the relationship between the elements and the variations of focus experienced as three elements interact. Rather than using simple geometrics only, I have added musical context to the painting in the forms of the piano, cliff and background sky as well as color contrast to the three shapes; the viewer suddenly experiences endless variations of focus between the balance of elements, as well as the synaesthesia of a suspended musical chord created by the piano standing at its tipping point.

To date I have painted 18 variations using this design as a template, most of them 10 x 10 and one larger, 30 x 30 version.  I’m proud to say that Malcolm Gladwell, author of The Tipping Point’  possesses one, as did Oscar Peterson. 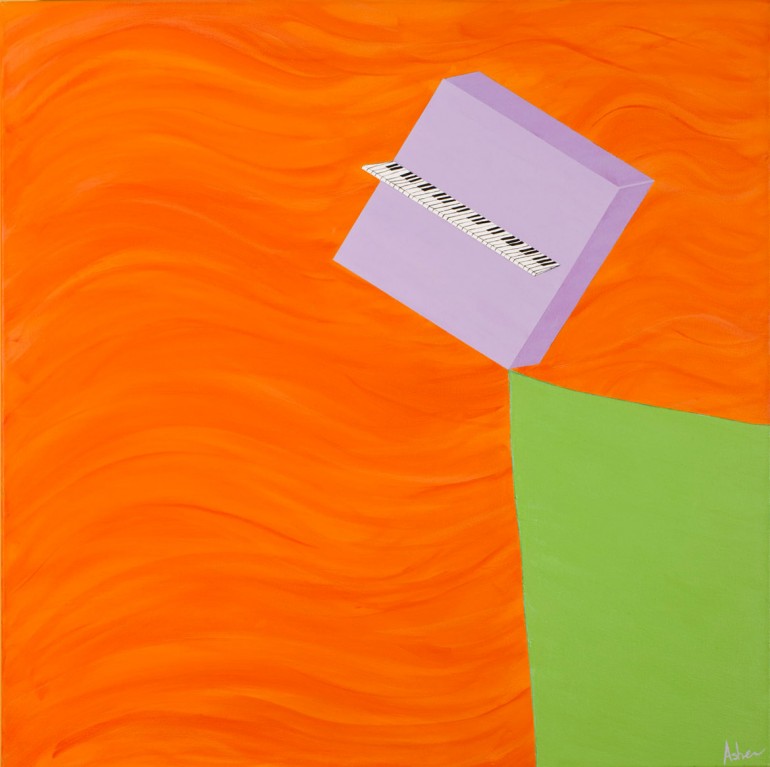