This is the second of three painted version of this image.  The original Embrace’ ,which can be viewed on this site, was based on a simple doodle of stick figures. The arms are inspired by one of my favorite sculptures “Kiss” by Constantin Bercusi.

Two central figures dominate the landscape, alone together in a crowded world. Is this a romantic embrace? A Platonic embrace? A friendly embrace? I see four different sets of figures here, two embracing, two kissing. Which head belongs to which body? In which direction are they facing?

There are two differently sized alternate versions of this image (one commissioned)  as well as several commissioned giclee reproductions. 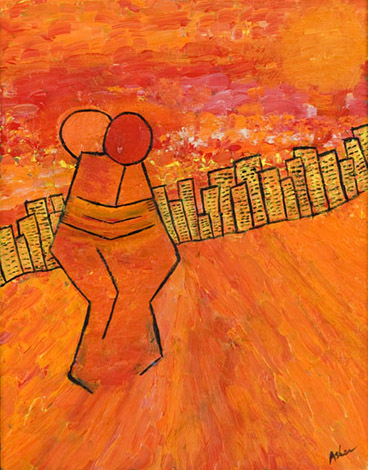